Brother Steve emailed this back in January. 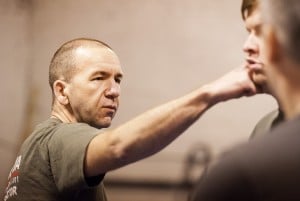 Joe Mayberry (right) demonstrates how to deliver a blow to an opponent with student Luke Andert while leading a class in the Russian martial arts at St. Louis Combat Institute on Wednesday, Dec. 19, 2012, in the Hill neighborhood of St. Louis. Mayberry, a St. Louis police detective, owns and runs the business with his wife, Jennifer Mayberry. Photo by Sid Hastings

“ST. LOUIS • Police Detective Joe Mayberry is looking for a little something more when he reads 20 police reports a day.  He takes an extra look at surveillance photos of bank and store robbers.  He asks victims a few extra questions: Were you looking down when you were attacked?  How did the bad guy hold his gun?

The fraud investigator is trying to stay one step ahead of the bad guys so he can defend himself against them — and teach others to do the same.

Mayberry, 43, and his wife, Jennifer Mayberry, 33, own and operate the St. Louis Combat Institute, based in a former storage garage in a small business park on the Hill. They teach kickboxing, Israeli martial art Krav Maga, and Systema, a Russian martial art.  While kickboxing and Krav Maga are taught at several other area schools, the Mayberrys say they are the only Systema instructors in the area.”

You can contact Joe and find out more at St. Louis Systema