Quote from one of the legends of Okinawan Kenpo Karate-jutsu

“The blocking hand must be able to become the attacking hand in an instant.  Blocking with one hand and then countering with the other is not true bujutsu.  Real bujutsu presses forward and blocks and counters in the same motion.”  — Motobu Chōki, circa 1920’s-1930’s

Mitose’s main source of information might have simply been books written by Motobu Chōki and/or Mutsu Mizuho, especially seeing how he plagiarized parts of them.

The point is, that Mitose’s “kempo” training –if any– was probably from the Motobu Chōki lineage.  He would have had considerable exposure to Seishiro Okazaki‘s danzan-ryu as well.  This does not imply that he earned any sort of black belt or instructor’s credentials from any of them.

Simply put, the origins of “kosho-ryu kenpo” as told by Mitose is very likely a complete lie & fabrication.

It is almost certain that the kenpo/kempo styles that originated in Hawaii with James Mitose and William Chow — Ed Parker’s Kenpo, Kajukenbo, & all of the others — are of Okinawan descent andnot from some hidden Japanese temple.

Did Mitose learn from Motobu or his students? 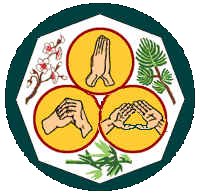 A.  Where they were –and when– overlaps often

B.  James Mitose only taught the Naihanchi kata – at least in the days of Chow & Emperado.  The oldest known reference to Naihanchi are in the books of Motobu Choki.  Why would a Japanese system that was supposedly around 700 years old use a 200 year old Okinawan kata?

C.  It is said that Motobu Chōki sometimes used the 3-hand symbols as in the Mitose crest (left).

D.  Mitose demonstrated ‘makiwara‘ use (an Okinawan method, neither Japanese nor Chinese).

E.  Mitose gave Chōki Motobu and Kamesuke Higashionna prominent pictures and credits as a masters of Karate-Kenpo in his first book, ‘WHAT IS SELF-DEFENSE? (Kenpo Jiu-Jitsu)‘

Do some research and come to your own conclusions.

“Mitose called his art Kenpo Jujitsu. He told us that he had learned it from Choki Motobu. I never heard the term “Kosho Ryu Kenpo” until he went to prison and some other instructors visited him and got master certificates in Kosho Ryu.   I also never heard from him the story about the Kosho family temple.” — Adriano Emperado,  in a recommended interview for ‘Centuron Negro’ by John Bishop, archived here at: http://www.cqbkajukenbo.com/the-sijo-emperado-interview-from/

AN INTERVIEW WITH ADRIANO D. EMPERADO: Interview for Centuron Negro by John Bishop

My related post on the subject on the Kajukenbo Cafe: Okinawan Karate and it’s relationship with Kajukenbo

« Home invasion caught on a Nanny-Cam. Story on News12 NJ [CANCELLED!] Gathering of the Ohana: ‘Princess Bride’ for free at Art Hill »